The Minneapolis Duathlon was the 4th of 5 races in the Team Ortho race series that I won entry into last December. I was excited to get out and spend sometime running biking and then running some more. I figured it would be good cross training for the Twin Cities Marathon coming up in a little over a month.

The weekend started out with a 2 hour and 40 min trail run at the Minnesota River bottoms on Saturday. It was a great morning to be out on the trails. Being on the trails reminds me of running cross-country.

After some good stretching and lunch, I went to picked-up my race packet. At the packet pick-up, they asked what kind of bike you were planning to ride. This isn't a hard question but I haven't been on my road bike in 2 years. I ride my commuter bike almost everyday. The dilemma...do I stick with what I am use to (commuter) or go with the hopefully faster road bike that has been sitting collecting dust for 2 years. I decided to go with the road bike.

I got home dusted the bike off, oiled the chain, pumped up the tires and found my road bike shoes. I was planning to take it on a test ride but it was rainy and wet outside so I decided against it.

Sunday morning, my alarm goes off at a way to early hour. I decided to bike to the start because it is only about 4-5 miles away and would be easier than finding parking in downtown Minneapolis. As I am biking there, I thought about how smooth, fast and nice my road bike felt. I was glad I picked the road bike for the race.

I got to the race and setup all my gear in the transition. I went out for a warm-up run and was in line just before the first gun was to go off at 7:01am. I was in wave 12 which meant I had 12 min to wait and be nervous in the crowd of people. I kept telling myself just take it easy you aren't planning to race this hard. You did a longer run yesterday. It is good cross training.

I was time for my wave to start. I lined up a couple rows back. The first leg was a 5k so I started at a decent pace. 1 min and 40 seconds into the race, I had passed everyone in my wave and I was beginning to pass the runners from the previous wave. I also noticed that my left shoe was untied. What should I do? Stop and tie my shoe...that would take too much time. I was only running a 5k so I decided to leave it. 4 min into the race, I started to hear additional clinking of shoelaces so I looked down, my right shoe was untied. Now what to do, I was just over 1/2 mile into a 3.1 mile race. I just left them untied and hoped that I wouldn't trip on them.

I triple knotted my shoes to make sure they didn't come untied. I was off on the last 5k with 1 goal in mind to not be passed by anyone on this leg of the run. I almost succeeded but a guy sprinted past me in the last 0.1. I felt good on that run. It was fun cruising past people. I finished my 2nd 5k 42 seconds faster than my first.

I ended up finishing 7th overall for women. It was a great day for a duathlon. 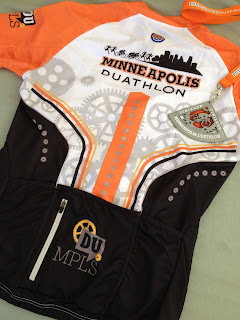 The medal and jersey from the race.
Posted by julie at 1:48 PM 6 comments: 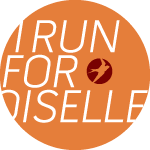